It’s that time of year again. After a pedal-to-the-metal (mostly figuratively) spring and summer rush in the DC moving industry, things are slowing down. Dramatically slowing down. At least this year we broke with our seven-year tradition and extended the busy time by another month. 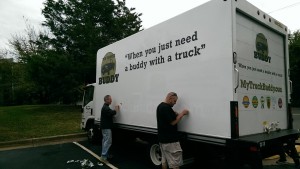 Getting ready to return one of the leased trucks…

What this means for our customers (or future potential customers) is a lot more flexibility on moving dates and times. We also consider taking a lot of jobs that we otherwise don’t normally take — anyone moving to New York? North Carolina? Need help decluttering your home? It’s all on the table.

What it means for me is that MY real busy season begins. It’s the time of year when I have to get off my complacent butt and get creative. It’s time to dig deep within the messy archives of my Evernote ideas folder and see what might actually have some viability. Here’s the challenge: we have ten times the need to market and advertise, and about half as much money to do it with.

At least this isn’t a new thing. In years past I’d be dusting off my resume right about now. Fortunately, I have a great opportunity with Uber to ease my burden on the business by doing some Uber driving, but still, these are the times that try mens’ souls…

Or something. The epic struggle ahead lends itself quite well to hyperbole.

One of our biggest assets is David Swain, MTB’s general manager and apparently tireless master of logistics. If you’ve moved with us in the last year, you’ve likely either spoken with David or corresponded with him via email. In addition to taking on the noodle-melting daily grind of providing estimates, scheduling jobs and assigning crews, he’s focused on the next six months, the next year, hell, the next five years. When I finally got in this morning (after taking a half-dozen discarded mattresses to the dump, a task this tired CEO is at least well-suited to do), there was David marking the floor with masking tape for our future storage plans. 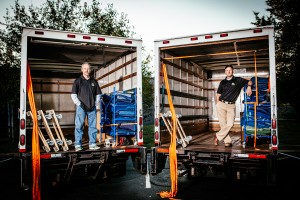 The imperviously optimistic David and me, the guy who takes mattresses to the dump

To put this in context, I made the mistake of looking at the calendar before I left yesterday. There’s a lot of space on it (read: “lots of availability — book now!”). I know better than to look at the calendar in the second week of October. It can reduce any oft-pummeled moving company owner to catatonic ennui. But here was David, knowing infinitely better our almost boringly common dire situation at this time of year, marking the floor for future projects. Not only does he expect us to survive the next six slow months, he expects us to come out with better service, more options, and, of course, better profitability.

It’s encouraging, to say the least.

To emphasize his optimism, he then showed me his complicated spreadsheets containing projected crew level needs and proof that his system of correlating crew levels to gross revenue actually works.

Anyway, for all the moaning I do about this time of year, it’s great. It’s exciting. You have to put yourself into a mindset to respond to the challenges ahead or else it can really do a number on you, so that’s what I do. In times like this you have to ask yourself “What would Leonidas do?”