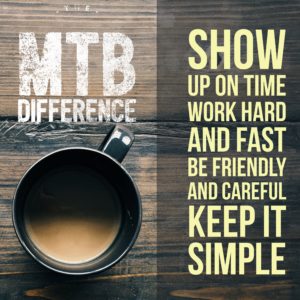 We were brainstorming a bit this morning about marketing stuff, and we stopped for a second and said, “Really, what makes MTB different?”

It caused me, in particular, to pause. Seriously – we’ve been doing this for ten years and this isn’t on the tip of our tongues?

So, we brainstormed. Not to get too “salesy,” but this is a somewhat abbreviated list of what we think we bring to the table that many others in our industry just don’t.

Sometimes I think this is the only basket we have. Everything else we are or do is pretty conventional, and, with all due humility, this is a pretty good one. With almost 600 visible reviews on Yelp (as of this writing), with a 5-star average, that’s kinda huge. We also have an A rating on Angie’s List with somewhere around 130 reviews, 98% of which are ‘A’s’, and an A-rating on the Better Business Bureau. Look around at other companies and you’ll see that this is above average. In fact, we have the second-highest number of reviews in our area in the moving category.

You’d think this is a no-brainer, but no, it isn’t. We call a good portion of the competition “Craigslist Cowboys.” You see their bandit signs in defacing the medians of the roads. They advertise things like “$55 per hour for two guys.” Sounds great, doesn’t it? Here’s the thing – without doubt, one of two things is happening here: 1. They’re not paying their dues – i.e. insurance, regulatory fees, taxes, etc., or 2. that’s an introductory rate applicable to 15 minutes of your move, or it only applies to certain jobs within a certain area. The bottom line: they’re able to offer that rate because they’re being shady somewhere in the process.

MTB, on the other hand, carries all the legally required forms of insurance, plus some. We’re fully compliant with all the laws we know about (you never know – the regulatory leviathan has tentacles everywhere…), and we pay our taxes. Boy, do we pay our taxes. So, while being fully legal shouldn’t be considered somehow “above and beyond,” it just is. As I often say, “we must be one of the few idiots out here playing by the rules…”

3. No [nonsense] or hidden fees

This might be considered another one of those “low bar” things, but hey, it’s still something we do (or don’t do) that others do do. (Heh – do do). We get about one customer per month, often more, where they tell us about their last movers. The Other Guys gave a great “introductory” rate, then jacked up the costs and added all kinds of fees. Long walk fees, stair fees, supply fees… Maybe it’s spelled out (deep in the contract) that these fees may apply, but still, it’s a shady way of going about business. We think, and our customers agree, that being up-front and clear from the beginning is the best way to go. Very often at the end of the job customers will say something like, “Really? That’s it?” They’re expecting our crews to hit them with some kind of bogus fees.

Sorry to disappoint, but that’s just not the way we do things.

In another year or two, we’re going to need a call center, but even then we’re going to use actual human beings. Because every move is different, every move must be personalized. That’s why when people call to discuss their projects they’ll be talking to someone who’s actually been out on the back of a truck, doing what we do.

Everything, from processing work requests to following-up before the job, is done manually by a real person. A lot of companies run people’s jobs through a sort of algorithm and out comes a price. We have our systems, of course, but it’s still based on our experience.

This is huge. In some cases, it’s critical. For example, there are a few buildings in the DC area with atrocious loading dock layouts. You have to go down a long hallway from the truck, go up a little platform elevator, walk more, and then go up the actual elevator. It can add hours of extra time, unfortunately. When we give estimates for these places, we always make sure to explain what the situation is. Nine times out of ten people understand – and are thankful for the explanation. We’re not trying to fool anyone – and we certainly don’t want to surprise them with larger-than-expected costs.

We occasionally travel far outside of the DMV, but 99 percent of our jobs happen right here. We know the best routes, the best times to travel, etc. This translates to more accurate estimates and realistic expectations. The difference here is that larger, out-of-area companies just aren’t going to know the lay of the land as well as those who travel it every day. A bigger, more established company based elsewhere is going to lock in clients to rates that don’t have to be that high – simply because they didn’t know the area.

One way other companies rake in the cash is by nickel-and-diming people with everything. You might get a decent rate, but when you add up all the costs associated with the move, it can be far more than initially presented.

Contrariwise, MTB gives you the rates and that’s that. Our moves include:

You might think that some of these things should or would be a given. You’d be right. But once again we can file this under “low bar superiority.” Of course every moving team should bring all the tools necessary to do the job. But, they don’t. (See the $55/hr Craigslist Cowboy crowd). The more established, traditional (and otherwise normal and decent) companies charge as a matter of course for all the little things like bags, wrap, tape, etc.

We just think it’s simpler to include all of that. Sometimes we take a hit on it, sometimes we don’t. Most of the time it just works out.

We realized last year that our turnover rate was relatively low for the industry. Sure, guys still come and go, but we have a group of dedicated, long-time employees that not only crush it (figuratively speaking) day in and day out, but they transmit the core values of the company from one “generation” to the next. We used to dread the hiring season – would the new guys “get it?” Would they give up too soon? Would they saunter in and demand special treatment because they had a little experience? As it happened, it really wasn’t that big of a deal – the long-timers at MTB teach the new guys the ropes fast and effectively. Seriously – the culture has taken on a life of its own.

It’s easy to discount this. Everybody expects a certain level of competence, but given the industry, they never expect excellence. That’s what long-time moving veterans bring to the table. They’re strong, graceful (don’t laugh), and have awesome customer service skills.

Anyway, the list goes on, but I think MTB brings a lot to the table. We’re not the cheapest operation out there, but we’re far from the most expensive. As far as transparency goes, you will likely not find any team of guys who is more customer-oriented than ours. I apologize if that comes off cocky, but I’m proud of what’s going on here.