Oh it’s no big deal. We have four others in storage around here somewhere. Yeah, that’s five total, but who’s counting? 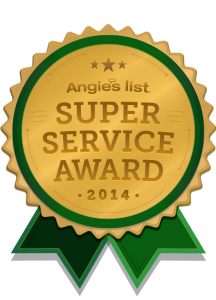 What is the Super Service Award? Well, beside it being an enormous validation of all our hard work, it’s Angie’s List’s annual award to about 5 percent of the companies reviewed on that site. It’s based on a company’s overall rating (which must be an ‘A,’) as well as the number of ratings within a given period of time. We get far fewer Angie’s List reviews than Yelp reviews, but apparently we got enough to make the difference.

Thanks to everyone who reviewed us! Thanks to the guys of MTB, too. They all put up with a lot — chaotic schedules, bad weather, traffic snarls… “The show must go on,” I often say, and the guys excel at helping everything work together in a consistent, logical manner.