I just had a notification pop up: “Laid off anniversary.” 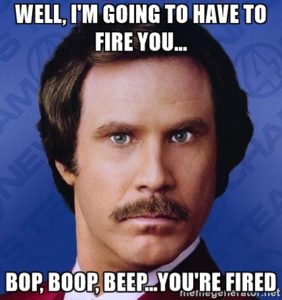 It’s kind of funny, actually. I should have known it was coming. Who am I kidding? I did know. I was just really good at denial back then. The writing was pretty much on the wall a few weeks before the actual dismissal. I’d been called into the office of the president of the little non-profit I was working for. He wanted to discuss a particularly difficult proposal I’d written (I’d been tasked with summarizing 90+ PowerPoint slides into a ten-page document, and as this blog post will show, I’m…not great…at brevity.)

I stood there in front of his desk while he sat at it going over the proposal. At twelve pages (the best I could do), it was very long for what he wanted. He took his time crossing things out, almost as though this was what he did for relaxation on his break. I looked over his head at his “power wall,” that memorial of greatness-in-association that you see a lot of in Washington. There was so-and-so, and that guy, and the boss with a group of people who even the most Kardashian-obsessed would recognize.

Sometimes he would ask for clarification of a point. Most of the time he would draw one, single, long diagonal line across an entire page. Once, (very memorably), just once, he said, “This is quite good.” I’ll always remember that. I just wish I could remember what it was I wrote…

Finally, he looked up at me and said, a la “Office Space,” “Do you know what you’re doing here?”

I decided to go radical and tell the truth. “Nope.”

Then began a fairly lengthy critique of my proposal which doesn’t really need to be recalled here. He wasn’t a bad guy – he was just running a fairly high-profile organization and didn’t have a lot of time to suffer the incompetence of barely employable poseurs such as myself.

I was dismissed to go redo the project which, in the end, was entirely redone by my immediate supervisor.

A few weeks later everyone was called into the conference room. Everyone, that is, except for a few notable exceptions. The boss strode in at just the moment when things were getting uncomfortable. We were all on one side of the long conference table; he was on the other side.

“I have some bad news…” he began, and then went into an explanation of how the economy was taking its toll on the organization. It was 2008, after all. December. Just before Christmas.

“If you’re here now,” he said, “Your job is secure for the moment.” I breathed a deep sigh of relief and, like everyone else, went back to my office to contemplate the gravity of the situation. I called my wife to tell her that I had just narrowly escaped the first round of layoffs. “Looks like we might have to get a Plan B,” I said.

Then my supervisor poked his head in and asked me to join him in his supervisor’s office. Apparently they hadn’t gotten to me before the meeting.

When they finally let me go (there’s always so much pre-amble to these things), I weirdly felt relief. No more worry about what might happen. It did happen. It was done. I had a couple of paychecks left. We could get through this.

Besides, I had the embryonic form of My Truck Buddy to rely on. I’d been “doing” MTB for about a year at that point, and despite my best efforts to wreck it, it continued to grow. I had a reasonable hope that it could sustain my little family – my wife and son and I. I figured I’d keep at that until the next thing came along.

But the next thing never did come along. I was grinding it out, one day at a time, often making decisions like, “Do I spend these last few dollars on food or gas?” Seriously, there were days when I would decide it was important not to run out of gas on the road, with somebody’s apartment load in my uncovered trailer, and hope for cash payment so I could get oatmeal for my son to eat.

Somehow, it worked out. Or has until now.

That first year, MTB grossed about $102,000. This year it will be closer to $2 million. That is NOT $2 million in my pocket. Bills continue to rise, regulations threaten to strangle it, and we’re in our winter slow-down. How we’re going to get out of it this time I do not know. But we’ve done it for almost a decade, so I’m sure something will work out. Well, not sure, but there’s a hope…

Running a moving company has more or less immolated the abundant sentimentality I started with, so it’s tough for me to “find lessons” in the experience. But they’re there. I’ve definitely learned a thing or two about business, myself, etc. But on this day one thing comes through loud and clear:

I am still utterly unemployable.