(This post is part of our “Moving Guide” series. To get back to the table of contents, go here.)

Gut check time. Do you really need that barber’s chair? Yeah, it’s a conversation starter, but does it really belong in an adult’s house? (I admit to having reservations about that one. As I write this, I’m literally sitting four feet from a barber’s chair we recently acquired as a throwaway, and I’ve gone from disgust to genuine affinity for it.) Do you really need that stolen orange cone to commemorate your senior year cross country team’s going to state? (Yeah, more autobiographical content.) And yes, we’ve all been to New Orleans. We know what the beads are for. You’re wild and crazy. 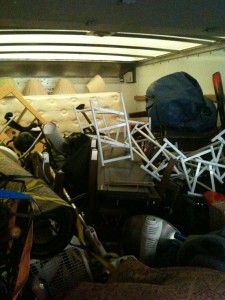 We do not like to see this and you shouldn’t either. Loads of random items are hard to pack, and the time it takes to load them racks up the cost.

Getting rid of your stuff can be liberating. It should be. Stuff clutters the house and clutters the soul. You should seriously think about selling it. Especially if you want to streamline the moving day process. Books are especially tedious. Don’t get me wrong – I think the Kindle and Nook are a couple of humanity’s worst ideas. Nothing beats spending downtime with a familiar old tome in the tub with some candles, glass of wine, and a Colbie Calait album. (Haha, lame. – ed.) But we both know you’re not going to read that old James Patterson novel again (and you shouldn’t). Just toss ‘em. To borrow a phrase from the writing days: “Kill your darlings.”

If you have too many cows to take care of, you will be very busy.

The main point: now is a golden opportunity to lighten the load and save some money – maybe even make a little money, which would offset the cost of the move. Some suggestions:

Have a garage sale

This needs preparation – it’s best to organize this up to a month before your move. You can either hold your own, or maybe dump your stuff off on somebody else. Check out www.garagesalestracker.com for starters.

Craigslist is the gold standard for getting rid of stuff fast. (And if it results in a few delivery jobs for us, I’m not complainin’). Also, neighborhood listservs are everywhere and quite useful.

Sell it at auction

Use a second-hand sales outfit

Goodwill and Salvation Army are the usual stand-bys. (They usually don’t take mattresses, FYI.) And Goodwill may or may not take a heavy-looking couch depending on the time of day. I’m convinced that at the end of the day, the worst thing Goodwill dock workers want to see is a couch.

Habitat for Humanity’s Restore locations will take your old furniture, too.

Take it to the dump

If you’re seriously liquidating, we recommend calling the guys at www.123junk.com. They’re incredibly friendly, professional, and have very fair rates.