I’m sitting here at our makeshift command center in the floor of our warehouse, and I keep hearing a word we don’t like to use around here: “No.”

That’s David. He’s the guy most principally responsible for logistics and, frankly, making miracles. David has this fanatical devotion to helping people out, making sure the guys are well-equipped, and solidifying the bottom line of the company. I’m not kidding — he’s so dedicated to the work that I sometimes wonder what he’s got up his sleeve. And you know what? I don’t care. Whatever it may be, it blows people away and Gets. Things. Done. 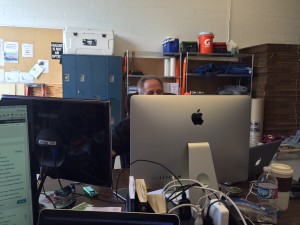 Dave in the command center…

But I digress… My point is that if there’s a way for Dave to get a job on the calendar, he’ll do it (and NOT by the means employed by so many people in this industry filled with scum and villainy.)

But for the last couple of days, as the phone has been ringing off the hook (or buzzing off the table, as today’s phones tend to do), Dave answers them, listens for a second, and says, “I’m sorry, but we’re booked through the first week of June.”

It’s a great problem to have as a moving company, but it’s still disheartening to have to tell people “No.” The problem is availability — finding the right kind of guys (men of integrity, in good health, preferably with a valid driver’s license) is a perennial problem. So, there’s only so many jobs we can take, and no matter what the size of the company, it’s a problem with everyone.

Here’s my point: if you’re even thinking of moving during the busy summer months (roughly May through early September), book a good moving company as early as possible. Otherwise, you could get stuck with the guys of dubious legality (I’m speaking here of their companies — the ones that don’t have insurance and don’t pay taxes.) These are the kinds of companies you hear about in “moving horror stories.” You know, the guys who hit you with surprise fees for long walks, stairs, etc. They’re the guys who hold your stuff hostage on the truck until you pay more than what they told you you would.

General rule of thumb: book early. To give you an idea of what our summer calendar looks like, here’s our weekend forecast (starting from yesterday), and this is still only May. By August we could be doing twice the number of jobs seen here if only we could find the guys to do them. By the way, that’s 57 jobs on the calendar, and thanks to a cancelation, we just added one more.