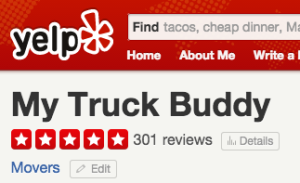 The other day My Truck Buddy reached 300 visible Yelp reviews. As one of the couple of readers of this blog, you probably get that Yelp reviews are very important for the business. Reaching 300 visible reviews is a big deal. The key word here is visible. We have almost 600 reviews in total (somewhere over 85 percent are 5-stars), but Yelp has traditionally “archived,” or in the new parlance of the website, “not recommended” new reviews within a few days or even hours, automatically. Why? To guarantee that they’re authentic, or something…

Anyway, for 300 reviews to be visible, you have to be getting a lot. Fortunately, we have. That’s thanks to many people — our awesome customers, of course, who take the time to recognize a company they’ll use once per year, at most. And naturally it has to do with the guys out there on the front line, rain, heat or snow (or, some days, all three, if you can believe it.) A few notes on that…

The 300th review came from Julie M. Here’s her review:

Second time I’ve used My Truck Buddy and they are just terrific.  Fast, hard-working, flexible, professional, and most of all affordable.  I really, really highly recommend them and will absolutely use them again.

The interesting — and inspiring — thing here isn’t that it’s her second time using My Truck Buddy. A big portion of our business comes from repeat customers and their referrals. No, the interesting thing is that two entirely different crews helped her out; once last year and once last month. As David Swain, MTB veteran and now general manager noted, it shows that whatever we’re doing right is transferring to the new recruits. Last year’s move was handled by Leon (3-year MTB veteran and now lead estimator), and Nicholas, who was, at the time, our intern. This year’s move was handled by Kevin and Bradley, two guys who have been with us for less than three months.

There’s a lot that goes into building effective crews who embody MTB’s First Principles: “Show up on time. Work hard and fast. Be friendly and careful. Keep it simple.” It takes weeding through dozens (at least) of applicants every time we post a recruitment ad, hours upon hours of setting up interviews, then handling the inevitable phone calls from the guys who “forgot” to show up for the interview. It takes hours of training, both in the shop’s apartment mock-up and in the truck for driver training. Then it takes a few weeks of shepherding guys through their first dozen jobs or so out in the field. Ara, our trainer and chief crew-quality officer, if you like, then assesses the men daily for optimal “configurations.” This guy works best with that guy, etc. 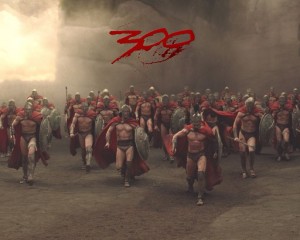 After a little while, you have a crew that’s so effective they don’t even need to talk — it’s like a dance where everyone knows the moves. They do talk, of course, and usually their time on the job so impresses the customers that they think they’ve been best friends for years.

Of course it’s not always like that, but it happens enough that the reviews keep rolling in, customers come back to us, and they send their friends our way as well. After eight years of trial and error, with a good solid year of putting hard-earned lessons into practice, I think I can safely say that we may have a system here. Otherwise, it’s a pretty consistent coincidence.

One other thing along these lines — Over the last near-decade, we’ve had hundreds of guys come through here. We’ve had white-collar guys, professionals between jobs, life-long laborers, writers, tradesmen, etc. For one reason or another, eventually everyone moves on. It’s a tough gig to do year-in and year-out. Sometimes, however, we have to part ways with guys for, shall we say, less-than-desirable circumstances. Sometimes it’s serious. Sometimes it’s not quite “serious,” but we have wildly divergent ideas of what the company should be. Whatever the case, the number of guys who come back years later, either looking for work or just to stop by and say “hi,” or sometimes to even apologize for something, is surprising.

There’s something here. It’s damned fragile, and I have no illusions that this little company will ever merit even a footnote in the annals of American commerce, but there’s something here that people appreciate — both the Truck Buddies and our customers. A culture is emerging. It’s a culture, I hope, of pride in our work, of authentic service to our community, and to a growing degree, of brotherhood.

Thanks again to everyone who’s taken the time to review My Truck Buddy (even those of you who didn’t write favorable reviews — they always show us something we can work on. This is hardly a finished project.) Thanks to the guys, and to the fantastic team that’s emerged over the last few months — Leon, Ara, and David in particular, without whom I literally would not be able to do this.